Showing posts from October, 2020
Show All

Trainee to Trainer, a story of HOPE.

At the start of 2018, Themba Training opened in their new space above Smiling Oven in the Gants Centre, after having relocated from their previous location in Crossroads. Marla van der Merwe, the newly appointed Project Manager kicked off the new year having created a new Themba Training product line and an array of training courses. News of the training courses was spread around through word of mouth among the projects and their communities.    It was in March 2018 that Nonkqubela heard of Themba Training through our Agape project manager, Thabisa, who had spread the word in their community. (These two women are friends and serve together at Every Nation Zola.) Nonkqubela then reached out to Marla to secure a space and days later attended the training, having never touched a sewing machine.  Nonkqubela wanted to upskill herself to help provide for her family and Themba Training could not have been a more perfect fit for her. After graduating the Basic Sewing Course, she transitioned i
MORE »

A journey through School of Hope

My journey with School of Hope started in 2008 when my dad enrolled me for Grade 10. I remember that year being extremely challenging, because of my health. Prior to 2008, I dropped out of high school because I deemed my circumstances to be more important than my education. Many people crossed my path and encouraged me to return to school, the desire grew stronger with time, but at the time I could barely take twenty steps without being exhausted (this is no exaggeration). I matriculated in 2010 as valedictorian; what I wanted to do after high school seemed blurry, but deep down I knew that I wanted to work with young people. I n 2011, I returned to the School of Hope as a volunteer for six months until I started working in retail. From this, you can gather that the school held a special place in my heart and it did not take long before I found myself walking through those doors again. This time the school relocate to Observatory and I was asked to present a speech during orientation w
2 comments
MORE » 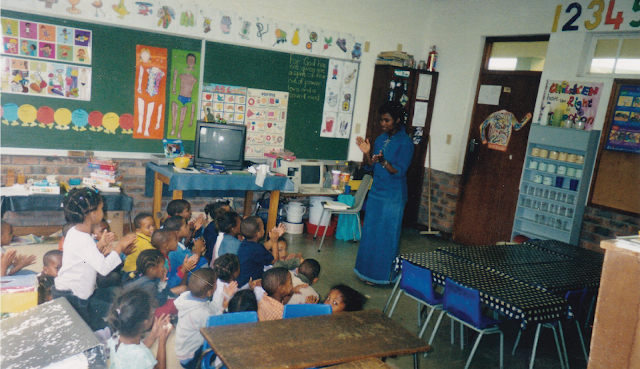 “We started Graceland with only 6 children. In 1999, I, Elizabeth Solomons started as a teacher. At that stage, I did not have any formal qualifications other than my Grade 6 certificate. I started working at the school in faith that I would do my job well. In 2002, I was offered an opportunity through Thembalitsha Foundation to receive education in early childhood development. During the next two years, I would take part-time classes at Boland College Strand and complete my Level 4 course in 2004. I am the oldest child of seven children. I grew up on a farm called Morgenhof in Stellenbosch. My first school years started in Cloetesville at Pieter Lange veldt Primary. I went to school up to the age of 12years, at that time we were 5 children already and my younger brother and baby sister were at home, my mother had to go work on the farm with them but had to made the choice of taking me out of school. It was not an easy time for me because I really loved school. Since that time I was lo
2 comments
MORE »
More posts