Showing posts from November, 2013
Show All

thoughts from volunteers and mission teams! 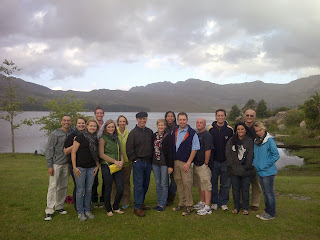 the infocus mision team at the very 'country club' that shana speaks of.... living in the day to day 24/7 world of the village of hope is an awesome experience and it's amazing to think that our small actions are having a huge impact in our community. we are obviously aware of the plight of the poor, we work with them each and everyday, however there are days when we forget that we still live in a very parallel universe, on one side are 'the haves' and on the other side are 'the have not's'. we are blessed to be able to host volunteers at the village of hope, these come in all shapes and sizes, they can be individuals who have felt the call to serve for three months or more, or can be larger groups of short term mission teams, mainly coming from churches who are linked to the wider foundation. it's interesting to watch the dynamics of these teams as they see for themselves the impact of our work via our various missions in our town and have an opport
Post a comment
MORE » 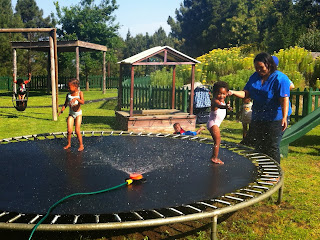 With only a few weeks until the end of the year we are packing in as much as we can before the country slows for the summer holidays. Sports Saturdays, music concerts, home visits, mission teams, budget meetings!!!!...We are actually looking forward to a slightly quieter time over Christmas! Perhaps some of our most exciting news is that two children who used to be part of our Village of Hope family now have a new family! They have been adopted as brother and sister to a wonderful American family. It is our first international adoption and is such a turn around of prospects for these little ones compared to when these two first arrived with us. Read all about their new family journey and the process of international adoption via their blog here: http://garrardpartyof7.wordpress.com/ . We are going to miss these two terribly but are SO over-the-moon for their new family! Fun in the sun Children’s Unit The children’s unit continues to be busy with seven children under the age of six! Thi
Post a comment
MORE »

- November 18, 2013
Who can believe that another year has come to the end? There have been lots of challenges this year, especially in the IPU: We had 61 new admissions for the year (this is except for those how had been re-admitted into the IPU) and 13 deaths. The sad part is two of the ladies who died were on our books the longest - but no amount of education, love, or care could stop the illness. There are so many out there who need our love and care, and our Home-Based Care ladies have a great task to see to them and their needs. To the many volunteers that visited our project and went on rounds with our Home-Based Care ladies this year, we want to thank each and every one. We pray that you will take with you the knowledge and empower others around the world with what you have experienced first hand. ThembaCare also put on a fresh coat of paint in the interior and we look really smart for the festive season. To our loyal staff, we wish you and your families a wonderful Christmas and that the new yea
Post a comment
MORE » 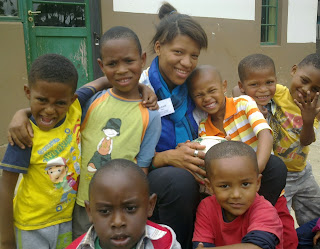 The best gift a teacher can receive for Christmas! In 1999, two little girls, Abigail Adams and Bernadine Van Wyk, started school at Graceland together in the 3 – 4 year old class. They were at Graceland for 2 years together before separating and continuing their schooling at different primary and high schools. Thirteen years later they reconnected at Bergzicht Training where they are both currently completing a course in Early Childhood Development.     Abigail Adams (19) “I dropped out of school when I was in Grade 10 but I didn’t give up. It is a privilege for me to be able to do my practical at Graceland because I had the best preschool teacher (Elizabeth) ever! And now I can say I am preschool teacher too.”       Bernadine Van Wyk (19)   “I finished high school last year, 2012. I am currently studying Early Childhood Development and am loving it. I never thought I’d find myself at Graceland again but here I am. It’s a great honour to be able to do my practical with teacher Elizab
Post a comment
MORE » 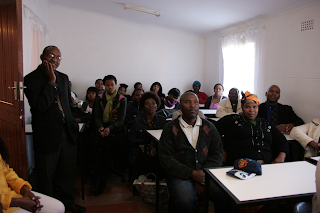 by Francois Heunis, Project Manager at Themba Training Patson Musabayane is one of a kind - there are not many like him. He is a true entrepreneur and leads the micro business training courses we present at Mfesane in Crossroads, Cape Town. Patson was born in Zimbabwe approximately half a century ago (very old!). He became a victim of the crisis that took place in Zimbabwe after 2000, and moved to South Africa in 2007. The Zimbabwean crisis split his family apart, and on top of it he then had to endure the evils of the xenophobic attacks in 2008. This is when he met Adrian Lange and was introduced to Themba Training. Adrian spotted Patson’s gift, and since then he has been the “anchor” trainer in our programme with hundreds of students passing through his classes. I have had the pleasure of sitting in on some of these classes. They are full of humour dramatic interaction, life, and lots of action. At times I am confused as to why he addresses certain subjects, but then I notice
Post a comment
MORE » 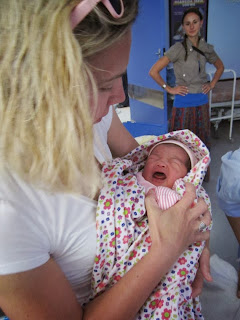 It has been a year since we met Sophie at our breastfeeding support group in Macassar. She was referred to our group whilst pregnant with her third child. The antenatal clinic sister thought that Sophie could benefit from joining our group. Sophie is young, under 25 years, and not a small girl. She has a few tattoos, she is confident and outspoken and often had the group in stitches. What we loved about Sophie was that she was extremely forthcoming with her story and her experiences and not shy to tell us about mistakes she has made and how she has learnt from them. She left her parent’s home at 17 when she fell in love with the man who also gave her the first taste of Tik. She soon became addicted to the drug and reverted to crime to pay for her habit. When Sophie went to jail she was only 19 years old. After her release at 22, she was unsure of what to do, where to go. Totally alone in the world, she was vulnerable to anyone who would offer her a roof over her head and some kindness
Post a comment
MORE »

help from our friends from dallas 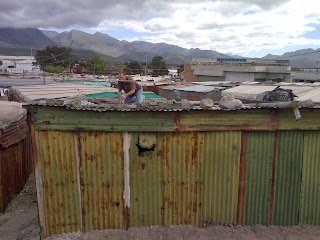 clearing the old tin roof last week we hosted our first major mission team in the new short term volunteers accommodation, the teams who had used it before were mainly couples or families so it was good to see that the building held up and was enjoyed by the guys from dallas. during the week they helped us with some jobs around the village of hope, sanding down the new board walks, chopping up wood to ensure we have enough dried for next winter, sorting donations and playing with the children in the unit. they were also able to help out with our community work, planning and running our rainbow smiles support group, assisting at our sports outreach and making house visits with our thembacare home based careworkers, they also joined us for our weekly thembacare service which was a joy to behold. after the installation of the new roof.. on friday the men helped to put a sail sheet onto one of our discharged children's homes (see photos) which was a real blessing to him and his grandmo
Post a comment
MORE » 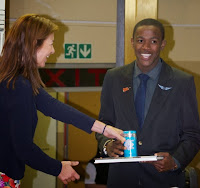 At our recent Awards Evening, we celebrated the achievement of many students and three young men in particular. These are their stories. Goldman Gambiza We met Goldman Gambiza when he was just 14, an economic refugee from Zimbabwe. As a child in the ruthless streets of Cape Town, he became part of the Adonis Musati Project an organisation doing wonderful work with refugees in the city. He was enrolled at School of Hope and soon became part of the family. The tension of being at school when his struggling family expected him to work, was overshadowed by his obvious academic intelligence and love for learning. But the tension remained. In spite of this, Goldman continued to perform well academically and reached Grade 12 easily. Goldman is a sensitive, compassionate young man. He demonstrates the value of HOPE, a joyful expectation for a preferable future. He is determined to complete his tertiary education and we will certainly be there for him throughout that process. Goldman wants to s
Post a comment
MORE » 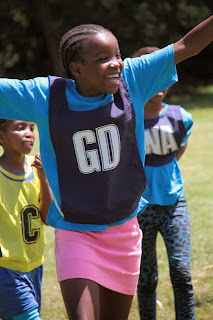 last saturday we held another of our amazing sports saturday's where we hosted over 160 children who joined us at the elgin country club on what was a very sunny and happy day, we therefore firstly need to thank God for the provision of the good weather, the finances and abilities that each of our team has which enables us to run an event as big as this. the children who came are part of our sports outreach clubs which run every term time weekday afternoon, weather permitting, in seven different areas around grabouw and it was a real pleasure to see the joy and excitement on their little faces as we met them at each bus pick up points with an expectation of a morning playing sports. the day is a celebration of the children's commitment to our weekly clubs and is a place where they can show us the skills that they have learnt on the sports pitch as we organise an under 11 and over 11 soccer (association football for all those living in europe!) and netball competitions throughou
Post a comment
MORE »
More posts