Showing posts from February, 2013
Show All

a quick catch up!

ukuqala3 richtfest lead by heinz wolf  firstly i am really sorry about the awful layout of this post, i have been playing around with the photos and text for ages and this is the best that blogger can do at the moment! so much is happening at the moment, which i am sure you can imagine with 28 students and their tutors from stuttgart who are completing the amazing changes to the buildings here at the village of hope but we have also been joined by our new dutch sports student and we have received some very special gifts which are making a difference to both the lives of the children who live with us and those who we help in the community. what follows is a very short catch up on all that is happening, complete with photos to give some visual perspective! phillip aka roger visits from switzerland, with friend (chris) we have received visits from some amazing people, not only did phillip, commonly known as roger federer, who was one of our first volunteers over 4 and a half years ago, co
Post a comment
MORE »

times they are a changing! 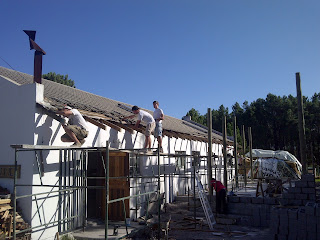 new bedrooms on the back of the childrens unit taking down the bedrooms which the vineyard team constructed over 4 years ago! the architectural team from stuggart, along with their trusted and adopted student, dave knight from england, are making a real impression on all three projects at the village of hope. saul and nigels bathroom is remodeled! for those of you who have visited or stayed as a volunteer you will notice a huge difference which can be seen in the few photos which i have posted, the children have now moved into the 'old volunteer' kitchen/meeting room and the team have been busy converting the volunteer bedrooms into our new office space with new entrance/reception area, but the main changes can be seen in the children's unit where the new bedrooms are taking shape and the kitchen and bathrooms have been ripped out to create some extra space for the additional work that we are planning at the village of hope. our new morning meeting space the long term team
Post a comment
MORE » 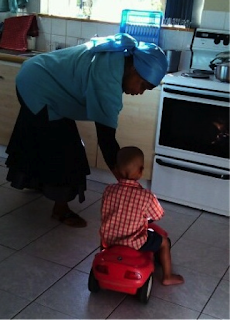 This month is certainly the month of HUGE change for Village of Hope. It really feels like we are going through a radical process when God is performing one of those tricks of pulling the tablecloth from the table without knocking over the glasses. We are trusting that by then end of it all we will still be standing, not smashed in pieces on the floor and that everyone will be wowed by the miracle He has performed! We have had to say goodbyes to children very close to our hearts which has been tough. You may have heard that Assi, the 12 year old boy who used to be in our care, died. Although this was not altogether unexpected given ongoing battle, we were still bowled over by it all. Thankfully it is not often that we have to encounter death and we all know that Assi is in the best place now. Whilst saying goodbye at his memorial we realised just how many people’s lives Assi had touched. This little boy, despite all his issues, and worked his way into the hearts of hundreds of people f
Post a comment
MORE » 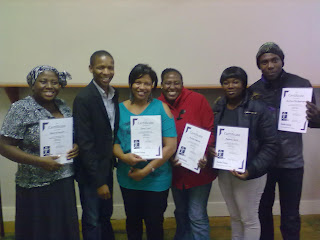 A number of years ago, a friend of mine who pastors a church in a community where alcohol abuse is rife, made the following comment: “January is panel-beating month for us”. He then explained that so many people in the community fall apart during the Christmas/New Year holiday time, spending too much, drinking too much etc. that January is then spent putting people together again (hence “panel-beating”). At Themba Training January is also a bit of a “panel-beating” time for us. Many of our students, who own micro-businesses, spend too much money in December. Numbers participate in the traditional annual “trek” to the Eastern Cape where families expect them to entertain and buy gifts. They then return to Cape Town with no money, and spend the next month trying to sell to people who are in exactly the same situation as they are. During January, the decline in numbers of regular traders and their little shops is obvious when driving around the townships where we operate. The only one
Post a comment
MORE » 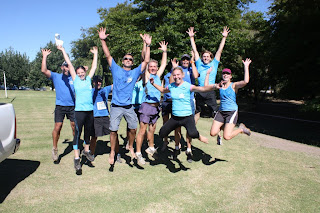 Miles for Moms Team 2012 The Miles for Moms team is back! Our challenge this year is the Jonkershoek Mountain Challenge on 5 May. Our team will be running up the treacherous and challenging Stellenbosch mountains in an effort to raise awareness and funds for Bosom Buddies. And as a special treat we have a celeb joining us! Watch this space… This month we are growing our support groups and antenatal efforts. We will be joining our colleagues and friends in Grabouw in the upliftment of that area, in particularly focusing on the mothers we love so much. We will have a daily presence in the MOU of the day hospital, where our employee will do what we do best – educate, support, inspire and offer hope. We are excited for this new venture and so grateful for our growth and progress. We are also happy to be advancing into Strand and Gordons Bay, where will support the clinics at Fagan street, as well as Gordons Bay and Ikwezi. Along with the rest of South Africa, I am outraged by the death an
Post a comment
MORE » 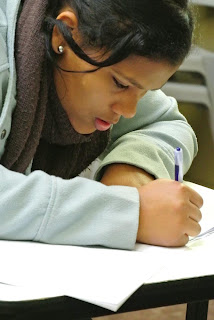 Matric mom, 19, gets an A for perseverance! This article appeared in two local papers in January 2013, following the announcement of the matric results. Words by Tanya Petersen. Fatimah Santon, 19, is proof that even when odds are stacked against you, anything is possible - even passing matric while taking care of your young child. At 15, Fatimah, from Portland in Mitchell's Plain, fell pregnant during her Grade 10 year at Spine Road High School. At the time she felt it best to leave school. Feeling despondent and with a baby on the way, Fatimah decided she had to go back to school. However, getting back into a mainstream school while being a mother was a bit tricky, she said. But she plucked up the courage and contacted the School of Hope in Bridgetown, which cares for children who struggle to continue their schooling at mainstream schools due to various circumstances. In 2010, on January 18th, Fatimah started Grade 10 at the School of Hope. ‘A'ishah, my baby, was only two wee
Post a comment
MORE » 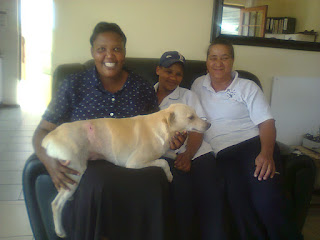 About a year ago, a scrawny little dog came walking through the gates at ThembaCare Grabouw. He spent the day with us and decided he loved it and never went home! We named him Wowow because most people that visited the unit and met him loved the story and said... you guessed it - Wow! He first arrived during renovations on the unit and the builder on site was so taken with this little dog that he decided to build Wowow a kennel. From that day on Wowow became our mascot, but what makes him so special is how he bonds with the patients by laying at their feet when they are out of their beds. He has also taken it upon himself to walk halfway home with the staff every day, almost like a guardian. He simply shows his love via these simple gestures. During the recent the riots in Grabouw our precious Wowow somehow got caught up in the mobs and was badly burned. His wounds were so severe that, as a result, he was admitted to intensive care. We were extremely worried. Thankfully he has re
1 comment
MORE » 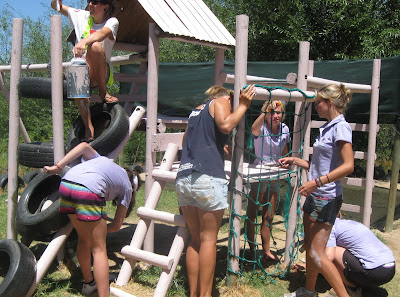 Connecting with Stellenbosch University On the end of the First Years MATIES launch, about 60 students did community service within the Devon Valley area and Graceland was fortunate enough to be a part of the community service project. 20 students came to assist Graceland with any maintenance that needed to be done. We had students attending to our vegetable garden, assisting with the daily routine, doing touch-up with paint to the school building, they started putting up our chicken-wired fence that had been donated by Mr and Mrs Ruest (local farm owners) and they painted our jungle gym with paint that had been donated by Stellenbosch University. The Graceland family is filled with gratitude and astonished at the attitude and diligence with which the students carried out their tasks. One of the students who participated in the community service is wheel chaired bound. Her life story and ability to serve despite her physical disabilities inspired and enlightened a new way of thinking w
Post a comment
MORE »

ukuqala3 arrive with a passion to build together... 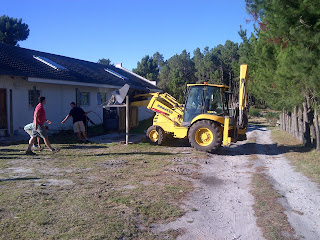 starting the works last week this morning saw the arrival of the full team from the university of stuttgart who will be spending the next six weeks at the village of hope creating the third phase of the ukuqala project and unlike the previous ukuqala teams the ukuqala3 team will not just be focusing their attention on one area of the village of hope, this year it is their plan to bless us in three different ways. the first will focus on completing the ukuqala2 building which needs to have it's outer coat of lime and clay applied, thus ensuring it is waterproof and able to take our first lot of volunteers in what will be our short term mission team accommodation. the ukuqala3 team arrive! they will also be building an ablution centre which will be made up of three separate buildings, a toilet block, a building for showering and also a wash room with sinks and washing machines, this will be positioned near to the ukuqala2 building thus enabling us to provide facilities to our short t
Post a comment
MORE »

assi touching people from around the world

click on the article to read pastor neils thoughts around assi we always knew that our little assi was a world changer, but it's been incredible to see that amount of people who have either posted on our facebook pages or sent emails with regards to the impact that he had on their lives. these people aren't confined to just grabouw, or the western cape, or even south africa, we have had literally messages from the ends of the world....from norway in the north, new zealand in the south, korea in the east and the USA in the west, he really did impact everyone he met. the thembalitsha foundation have put together a short story of his life, which appears on facebook but i understand that even if you haven't got a facebook account you can read his amazing story by clicking here! the news of assi's passing even appeared on the front page of our local paper with a short thought from our vicar, neil meyer, on page three, who highlighted that assi touched people across racial, r
Post a comment
MORE »
More posts