Showing posts from November, 2012
Show All

HOPE2012 and our world AIDS day event it's nearly here

- November 29, 2012
for those of you who haven't heard we are hosting an amazing music event called HOPE2012 here in grabouw this coming saturday....what has been billed 'the biggest south african world AIDS day music event' will be taking place at the elgin country club with major south african bands, the parlotones and watershed headlining an afternoon and evening of quality music just down the road from two of our projects, the village of hope and thembacare grabouw, which have picked up the challenge of the AIDS pandemic in south africa. our friends at goodhope fm have taken up the batten partnering with us to raise the profile of the work that thembalitsha are doing across the western cape and with the support of our round table (who will be running the beer tent) and local vineyards who will be serving some of the amazing wine that is produced right here in the beautiful overberg we hope that people will see the good work that is going on in our lively little town. for those of you i
Post a Comment
MORE »

lots of 'rainbow smiles' at the beach... 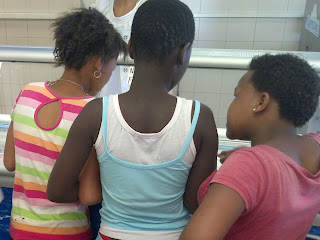 which colour are you gonna choose? snacks on the beach on friday we spent an eventful afternoon with the children from our HIV support group, 'rainbow smiles', as we took them to the beach at gordons bay...eventful in many ways, for some of the children this was the first time at the beach, somewhat crazy to think that it's less than 20 minutes from their homes but in their world it's a million miles from their day to day surroundings. eventful as hardly any of them had a change of clothes, let lone swimming kit and a beach towel, not an everyday item when you live in a home with no running water or electric, eventful as we blessed them with a visit to the ice cream parlor and gave them the option to chose a flavour....not something that many of them have ever had the chance to do before, eventful as some of the ice creams ended up in the sand!.....eventful in the fact that rob's faithful landrover broke down just as we arrived at the beach and we had to not only to
Post a Comment
MORE »

our biggest sports saturday yet! 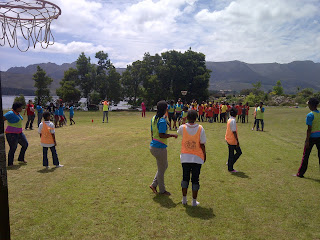 fun at the huge netball tournament on saturday we hosted our biggest sports day ever at the elgin country club. our weekly sports outreach clubs have been growing in number over the last 6 months and the investment we have made with our sports mentors being a huge influence on that. as has become custom we like to bring all the children that we work with at the different clubs together for a whole morning of fun and games, based around our soccer (football) and netball teams. it's a goal! i hope that i'm not taking anything away from any of the other sports saturday's that we have run by saying that this was not only the biggest, with a total of 198 children attending, around 140 was our previous highest, but also the best organised. as with all things you hope to improve and some of the lessons we have learnt in the past were overcome and even with a smaller team of volunteers compared to the past we were able to host a bigger event which is a real testimony to those who h
Post a Comment
MORE » 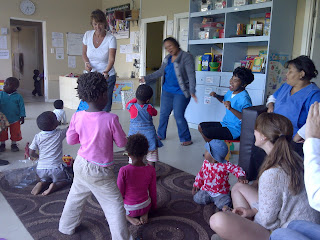 a happy third birthday, celebrated by lots of friends! yesterday we held a huge party for the boy who has been with us since he was five days old, it was his 3rd birthday and the house moms, our volunteers and even two his little friends who had spent time with him at the village of hope before their discharge back to their families were able to join him in making the day special. we love this little one but continue to pray for a favorable outcome in what is a complex case.
Post a Comment
MORE »

- November 12, 2012
not only did we place our 27th child home with either their own family or into long term foster care on friday but today we have the wonderful news that we have now found an adoptive family for our 28th child. we can't say too much about the case as it is a little complicated but please know that whilst we are sad to see this little one go we thank God that a secure and loving home has been found, and we send the child off with the knowledge that we provided the care that was needed at this point of their life and we were able to love and nurture them in our wonderful children's unit
Post a Comment
MORE » 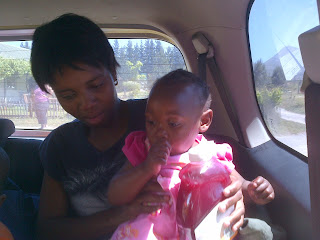 loving aunt saying goodbye is always hard, especially if we have little expectation of seeing our successfully placed children again, however we do rejoice that we have now placed our 27th child back home with their family which is amazing testimony to maz and her team in the children's unit here at the village of hope. this last little girl, of 2 years, is been taken to stay with her aunt in the transkei, the tribal homelands of the xhosa people. the aunt made the 12 hour journey down to grabouw in a taxi and the girl is now well on her way to her new home, we wish them well and will continue to pray for her.
Post a Comment
MORE » 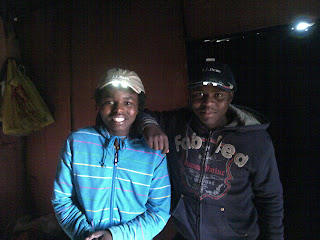 happy but hungry mentors late last week i was able to bless two of our sports mentors with a wonderful gift that was donated from our latest team who visited us from the united states. the gift was a sports cap with built in flashlight which is not only a cool accessory, maz has one so as not to wake me when she is reading at night!, but will make such a difference for our two mentors as they struggle to complete their school homework in their dark and electricity free tin shack in the iraq informal settlement in grabouw. delivering our life skills in iraq informal settlement today the boys were very pleased to receive this gift but once i had presented them with their cool hats, see photo, they asked if there was any way that i could help them out as they didn't have any, yes any, food in their home for that evening meal..........it suddenly stuck me that although they received a $30 cap which would help them in the future their immediate need was to put some food on the table! en
Post a Comment
MORE »
More posts