Showing posts from January, 2010
Show All

life with out arry... 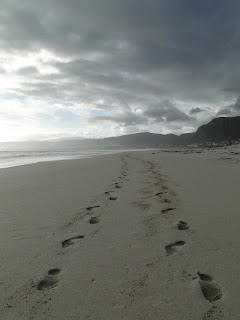 on thursday evening we placed young arron on the plane home to england for his three month discipleship training course with YWAM (youth with a mission), the team he will be joining is then coming back to grabouw to serve in the community via our sports outreach during the 2010 football world cup..... we will miss arron whilst he is away as he has become a key member of the team here at the village of hope, it's also a new period for me (tim) and maz as we learn to live without any of our children around since we first started dating 23 years ago.....talk about derby and joan!......
Post a Comment
MORE » 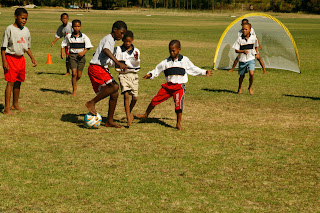 last saturday morning we held our latest sports saturday, this is an event organised by daz under the sports outreach and run by village of hope for the children that attend our soccer and netball outreach in the town, we hold it at the elgin country club which is a world away from the communities where these children live. once again we had over 100 children attend, split into 8 soccer teams, 4 under 15 and 4 under 13, and 4 netball sides......iraq boys won both the u13's and u15's soccer and a team of girls from elgin timbers won the netball....we want to thank our norwiegen volunteer (trondor and gretta) for providing the funds for us to run this event, which included a cool drink and a hot dog to end with...as well as prizes for the winning teams and best player awards. we thought that you might like to see a couple of photos, one shows arron with his rooidakke team, another some girls playing netball and the last one some of our under 13's boys.
Post a Comment
MORE »

- January 20, 2010
this month has seen the launch of the new vale of aylesbury vineyard web site which includes a great page highlighting the work that we are doing on the village of hope here in south africa, go check out their web site and the page that we appear on via the 'blue links' above. they join the winslow christian fellowship, recently renamed 'winslow vineyard', with their support page and the everynation church in hammersmith who have been supporting us for a little while visit their web site , over the christmas period the everynation church have been running their hope challenge which has raised around £7,000 for us and the work we are doing as we seek to make a difference to children infected or affected by HIV and AIDS. thanks guys for your support.
Post a Comment
MORE » 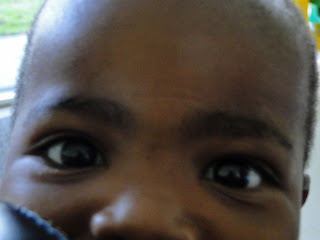 we just wanted to make the most of the new internet connection to upload some of our christmas and new year photos onto flickr, please go have a look via this link , these include a new years firework display, a couple of outings to the beach and our new jungle gym ......if you don't have time to follow the link then see the slideshow on the top right hand side of this page..we hope you like them!
Post a Comment
MORE »

- January 18, 2010
January Newsletter Water, water nowhere! Firstly may we take this opportunity to wish all of you wonderful supporters, family and friends a belated Happy New Year and we trust that you will be blessed with all the things you hope for in 2010.Christmas is a hectic time for any family and that was no different for the team here on the Village of Hope. With the turning of a new year we are really looking forward to everything that 2010 holds for us as we seek to develop the plans for our project, especially as the focus of the world in June and July will be on South Africa as we host the 2010 Fifa world cup. It looks like it's going to be another busy year for us out here! Unit News As with most months, December wasn't without its challenges. Our phone lines were stolen on 7th December, only to be replaced and stolen again within 6 hours on the 14th December. It has been difficult to communicate with the wider world, which was a little disappointing over the festive period and we
1 comment
MORE »

we have phones back!

- January 14, 2010
just a short post, which i notice is the 100th of the village of hope blog, to say that after 6 weeks of waiting we now have our phonelines restored, and therefore the internet, i hope to be able to update some photos on my flickr site and keep you all up to date with future news from the village, lets pray that the lines stay up for a little longer now!
Post a Comment
MORE »

- January 13, 2010
it's always nice to see other peoples perspective on life and here at the village of hope that's no different, trondor from norway is working with us for a year and has his own blog, see here for a piece about the 2010 soccer world cup , you will have to get google to translate it from norwegian for you....jess (our longer term volunteer) has just returned home and is struggling to understand life, have a look at her blog here . we want to thank all our volunteers from 2009 and we hope that you will find the real purpose of life following your experiences with us.
Post a Comment
MORE »

- January 08, 2010
well christmas has come and gone but our phonelines are still down so our blog is stuttering along at the moment....we just wanted to wish all the wonderful people who support the work we are doing on the village of hope a very happy new year, we trust that 2010 will be all that you dream and desire. 2010 will be a busy time here in south africa, what with the 2010 world cup taking place in june and july, we will try to keep you informed of all the events that we are going to be arranging during the year, we wanted to let you know that arron will be returning to england for around 3 months at the end of january to complete a DTS (discipleship training course) with YWAM (youth with a mission) where he will join the team as they complete their training which will enable them to return to south africa as they run our soccer based outreach over the world cup period.
Post a Comment
MORE »

and now no water

- January 02, 2010
we are really being tested at the moment, on new years eve, around 5pm when all the businesses had shut for the weekend, we found out that not only was the water holding tank empty but the pump that runs from our 30 meter deep borehole was broken...after me, rob, the plumber and an electrician had sussed that out it was too late to do anything and we won't be sorted until at least monday!...that means that the whole village of hope project is without water....i have managed to arrange a 'water tank' with municipality water to stand outside the children's unit but we are now filling buckets to wash the children, make our tea etc! what this episode does make us realise is the plight of thousands of our neighbours who live from standpipes day after day.........we thank God that our water will be restored soon, for those around us theirs is a daily, monthly and yearly problem that seems too long to be resolved.
Post a Comment
MORE »
More posts