Showing posts from September, 2009
Show All

- September 28, 2009
myself and maz have been struggling with sore throats over this last week and yesterday maz decided that enough was enough and she would go to the doctors to get some meds to help, i was driving so ended up visiting the doctor as well (he confirmed that my cold was a lot worse than maz' and gave me double antibiotic, but hey we men always know that we get worse colds and flu than women, the doctor just confirmed that yesterday when we saw him together, oh and i must add that i wasn't the one who was that bad that i needed to see him!...) sorry maz.. that aside it was the first time that i had been to the doctors since we arrived nearly a year ago, not bad really, but maz had been down with some of our sick children....any how as we were sitting waiting in the well furnished waiting room, with newspapers and magazines to hand, maz told me that this wasn't 'the side' that she normally waited in, in fact she even used a different door to enter the place when she bough
Post a comment
MORE » 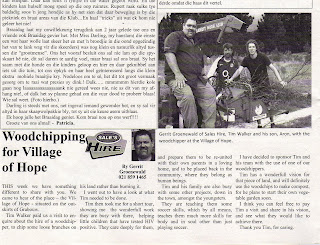 during the week the guys from sales hire in town blessed us with the use of a wood chipper which we have used to clear some of the many piles of wood that we have round the farm. sales hire manager gerrit wrote a wonderful article in the local elgin grabouwer about the work we are doing here on the village of hope..click on the image to have a read...
Post a comment
MORE » 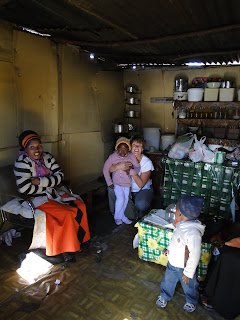 yesterday we had the pleasure of placing one of our precious children back home with her family, unfortunately this little girls mum passed away but her aunt has taken over custody for her. we are going to be continuing supporting her with food parcels and clothes for the immediate future but we pray that she will fit in well with her new family.
Post a comment
MORE »

norwegian joins the blogging on village of hope

- September 23, 2009
trondar our norwegian volunteer has started his own blog, in norwegian, where he is posting about the year he is spending working with thembacare and village of hope here in grabouw, although the blog is in norwegain you can use the clever google technology to translate for you. please visit his blog and have a look at the work he is doing with us on the village of hope.
Post a comment
MORE »

so you wear gloves all day do you?

- September 21, 2009
i had a chat with a local grabouw man yesterday and he wanted to know how we were getting on at the 'farm', the conversation went something like this: him: 'what are you farming up there then' me: 'oh children' him: 'ha, ha' me: 'no really' me: 'we work with children infected with HIV and AIDS and we have a home for ten of them to stay with us on the farm, called the Village of Hope' him: 'oh so you wear gloves all day do you'? him: 'do you get yourself tested for AIDS often'? such is the limited knowledge of the local population to a situation that is killing and affecting millions of their country men...sad but true
Post a comment
MORE »

- September 20, 2009
yesterday we met the filming team for the last time, the team, led by wayne schoenfeld and nadia duguay, had arranged for a local 'squatter camp band' to perform, along with dancing, as the credit roll sequence for their new film, me, maz and two of our babies were there, along with other people from our community who had 'appeared' in the film. during the week the team had been out in the community with some of the thembacare nurses, attended our service on wednesday afternoon, which i (tim) led during the service we looked at the power of God in us as we serve our commnuity, amazing stories of God's power were captured on the film, which we hope will serve as testimony to His working through us, they also filmed phumesa and her family in her home in rooidakke, as well as spending some time with us on the village of hope. we hope that this film will tell the story of the carers, and the children infected with HIV in our community. this will be the next in the serie
Post a comment
MORE » 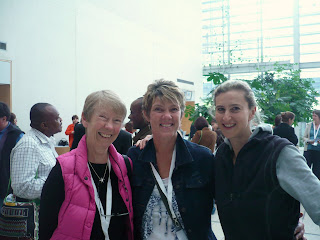 this morning, we (me and maz) had the opportunity to attend the childrens hospice international world congress in cape town. it was such a pity that we didn't know about this event before hand but we did spend a few hours meeting key people in the childrens hospice world!.....we also were invited to listen to nadia, from the exeko project mentioned on the previous post, share her talk on therapeutic clowns which was very interesting. as we broke for coffee maz had the amazing opportunity to bump into sister francis, the founder of helen and douglas house , a charity very close to our hearts as we have had contact with them via our wonderful friends pete and rachel griffith. what was the chance of that meeting?....amazing.
Post a comment
MORE »

weekend filming and a new boy! 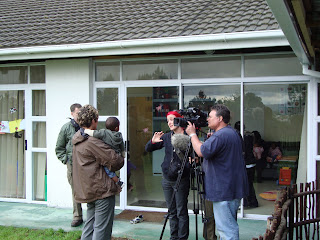 this weekend we have welcomed a team from canada who are filming at our thembacare and village of hope projects in grabouw, the team are from the exeko project and are following the lives of our careworkers and the children we look after on our project. today, as the team were filming, we were contacted by the thembacare team in grabouw about a boy who needed a home whilst his mom received treatment for HIV at the clinic, he is about 3 years old and is also HIV+, it was amazing to show the film crew around the settlements and for them to see the day to day work that we are doing in our community.
Post a comment
MORE »

- September 11, 2009
8 years ago today around 4000 people were killed in the awful events that surrounded the destruction of the twin towers in new york, today once again the world remembers those that died in that tragedy. today around 1000 people will die of AIDS in south africa, by the end of next week 7000 people in our country alone will have lost their battle of this awful disease, families will be mourning the lost of a mother, father, or even a child, families will be devastated and the lives of those thousands left will be made even harder. please take time to remember the dead today, whether killed by terrorists or disease.
Post a comment
MORE »

i love my bakkie 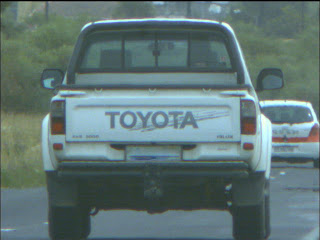 i just wanna tell you that my bakkie is great, its a 1999 toyota hilux, 4x4, 3litre diesel, it can go anywhere, up mountains or down valleys, tow anything trees, cows, trailers and with a little bit of a hill and a wind behind me i can also get a speeding ticket, or two in it as well!........
Post a comment
MORE »

- September 07, 2009
this morning i woke early as i was going to visit a school assembly with reagan and sandra, after waiting around for about 20 minutes, with loads of kids shouting out hello oom tim (afrikaans for uncle tim), we were told that the school wouldn't be having an assembly as planned this morning...what i thought, we got up early, prepared over the weekend, trying to buy watermelons, out of season!, and now there's not going to be a school assembly....why?......oh cause it's raining came the reply, still a poor excuse i thought but then when sandra showed me where they hold the school assemblies it made a little more sense....the school assembly would be held in an outside courtyard between the classrooms and they didn't want the 500 or so kids to stand in the rain whilst we led a time of prayer, worship and teaching......a good call in the end i felt!........ today we also had the pleasure of welcoming michael and janet arthern, from southcourt baptist church in aylesbury, a
Post a comment
MORE »

- September 03, 2009
last night we met up with some amazing people who are already helping in the fight against HIV and AIDS, can't tell too much yet but we might have some exciting news to tell about that in the future. one guy, len, runs a 'facebook style' web based application called medibook which is an online data base for hospitals etc in the northern cape, we will be looking to see how we might work together to bring that in to support the work we are doing in grabouw. one of the applications on this site is an up to the minute report of births and deaths in south africa, quite shocking really as you can see how many people today have died from various diseases, and or this can be looked at by the month or year.....the figure of 1000 deaths from HIV today still stands... click here to have a look and be shocked by the amount of people currently living with HIV.....in all that we are doing we still have an increase in numbers, but we might just have found a solution....more on that one a
Post a comment
MORE »

- September 02, 2009
please could we ask you to join us to pray for our wonderful 9 year old boy, sorry can't provide names, who is not only infected with HIV but also suffers from alcohol fetal syndrome , has taken a turn for the worst and tonight we have taken him to a local hospital, 30 miles away!, for checks on possible TB or pneumonia........ ....on a massive positive not the laptop that was stolen from a local home, see previous story, has been found in the 1.5million strong township of Khayelitsha..!.....amazing hey, the boy who lost it is over the moon and thanking God for returning such a precious item to him.
Post a comment
MORE »
More posts