Showing posts from May, 2009
Show All

- May 30, 2009
last night both bruno, our little jack russell puppy (8 months) and seth, daz and lisa's little boy (11 months) joined those who we need to take care of, please pray for seth as he is feeling a little under the weather and for our bruno who has got tick bite fever.........life is never dull up here on the village of hope.
Post a comment
MORE »

- May 27, 2009
today we had the honour to provide a 'new' home for one of the thembacare grabouw careworkers , the team from england wanted to bless someone or invest in something whilst they were over, so i arrnaged for a 'shed' (for want of a better word and believe me in our western eyes that's all it was/is) to be made and delivered flatpack into the new squatter camp of xola , rooidakke . the team didn't do much putting together, that was carried out by the guys who made and delivered, however what the team did was invest time, love and money into providing this amazing lady with a safe, secure and water tight home for the winter and we hope many more to come. well done guys and get those photos onto facebook or flickr soon and we will set up a link for the world to see what you have done. if others would like to invest in our careworkers lives then please contact me via our thembalitshauk web site and we will make sure that your money is spent well in supportin
Post a comment
MORE » 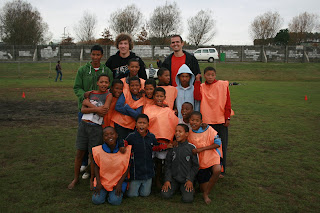 on saturday we enjoyed our first ‘soccer saturday’ outreach in grabouw, the aim of the morning was to bring together the various teams that we run during the week so that they could put into action the skills, both soccer (and netball) and the lifeskills we have been teaching them over the last few weeks.. the event started at 9am with prayer (following a manic time for the organising team, of daz, lisa, maz, arron, reagan, tim and sandra before hand to ensure all the children arrived on time) and then the ‘tournament’ started, this was which was a round robin affair with all teams (hillside, pineview, iraq, roooidakke, elgin timbers) playing each other to decide the overall winner. 4 teams contested the under 15 soccer league, all 5 entered the under 13 soccer league and lisa ran 3 teams for the netball. Each of the soccer teams were made up of 5 boys, with up to 4 substitues and the netball was obviously seven with again a few subs...it was great to see over 100 children come togethe
Post a comment
MORE »

- May 22, 2009
thanks for all who were praying for the water situ on the village of hope, all now seems to be sorted, abet the water is back to it's inviting brown colour...however we have some so we should be more than happy.... the team from aylesbury have had a busy day, i ( tim ) took them into the community this morning to visit and pray for the sick and needy, think for some was quite tough but hey seeing the way that thousands of people in our town live is quite shocking...... for those of you who are interested please have a look at viv (the lady who completed the skydive for her 60 th birthday to raise funds for thembalitsha ) via this link and if you feel compelled to give then please visit her justgiving site ! thanks
Post a comment
MORE »

no water at the voh

- May 21, 2009
today of all days we have had awful problems with our borehole. why today, well ross and his team of volunteers from aylesbury (my home town) arrived this morning and we couldn't even welcome them with a warm cuppa!.....mores the problem in the baby care unit where we spent a whole night with no water and this morning there was no opportunity to wash or even make up their breakfast.... ....it all seems to be caused by an electrical fault and this has been temporally sorted by a local electrician, however due to the length and type of cable we require we have had to place this on order so there seems little chance of this being sorted before the weekend....so for now its no showers or even hot water (another long story) so please pray for us, the team and especially those precious little babies.....
Post a comment
MORE »

- May 15, 2009
last weekend i installed a freestanding open fire in to the corner of our open plan living room which we hope will keep us warm during the colder winter months of the western cape, all seemed to be ok with the installation, i made sure that i sealed the chimney where i had broken through the tiles in the roof to ensure that we didn't have any unexpected puddles when it rained...... ...last night it rained, and rained and the wind blew and blew and by the morning we had a lovely puddle under the fire with water streaming down the outside of the chimney...it seems that my efforts had been in vain. this afternoon i visited the local hardware store to find some heat resistant silicon sealer which might help with my problem.... i'll let you know how it goes.. ...the main reason for this story isn't to confirm my lack of handyman skills to many of you who will all know that that isn't my forte, other than i think over this last 7 months i have achieved much more during the
Post a comment
MORE »

- May 12, 2009
just wanted to point you to the donation page of our 'old' youth pastor from aylesbury , the young mr chris stoddard and his even younger daughter, l ouise , are attempting to ride from the top of scotland , yes that bit of land with all the mountains and loch's, to the bottom of england raising funds for thembalitshauk , please visit his justgiving site and support him, and us! .... ...we also want to thank viv bailleux , who on the celebration of her 60 th birthday, sorry for the mention of your age viv , jumped from a plane, with a parachute attached i hasten to add, to raise funds for the work we are doing in grabouw ....thanks to all those who sponsored her as well!
Post a comment
MORE »

god of this city

- May 09, 2009
now i know that grabouw is by now means a city, but God has really been speaking to me about the fact that whatever is going on in our town, and we have some really problems, our HIV rate is over 30%, we have the second highest rate (last year we were top, but thanks to the work that vicky and the rest of the thembacare team our doing in our town we have been knocked off the top of the pile) of new TB cases in the whole world, many of the children that we work with in our sports outreach programme have been raped or sexually abused during their short lives, and i would think that every family we are working with lives on less than a dollar a day, pretty grim hey.....God is still God of this city, this town, His people. the song God of this city, which has been covered by the world famous christian artist chris tomlin , has become an anthem for me and i would just like to encourage you to have a look at this clip from the band who wrote this song , they're called bluetree and
Post a comment
MORE »

- May 07, 2009
below is an except from this weeks football training session in the iraq squatter camp....... 'don't stand around with your hands in your pockets, do you see professional soccer players with their hands in their pockets?.....do the players for orlando pirates or ajax cape town stand about looking at the sky?....boys boys how many of you have seen a soccer match?....(silence) on the television?' (silence).....my mind then clicked into gear and i realised that the homes (wooden shacks with tin roofs) that these guys live in don't have electricity, or running water or a toilet for that matter, how could they have seen their hero's play, let lone on a tv, how would they know that footballers don't stand about with their hands in their pockets!......... this is a day to day situation that frazzles our brains, we live with all that you guys have in 'the west' but in a country with so much how come so many have so little....?
Post a comment
MORE »

- May 06, 2009
today has been a special day at the village of hope, for one we celebrated our eldest childs 9 th birthday, this little guy only joined us a couple of weeks ago so the team from thembacare althone came and joined us at his little birthday party......the team also bought over two new children for us to care for, a little 18 month old girl and a lovely little 2 year old boy.......it's amazing to spend time in the unit with these children, yes i ( tim ) even took time to feed a child this tea time!, and to see the village of hope provide a home to these little guys. with the unit now up and running our costs are rising, providing meals, accommodation and care for these children costs money so if i could please encourage you to partner with us, the easiest way to do this is via justgiving or you could contact our team in the UK via our UK based website , all donations will go to the work that we are doing here on the village of hope and to the wider thembalitsha projects
Post a comment
MORE » 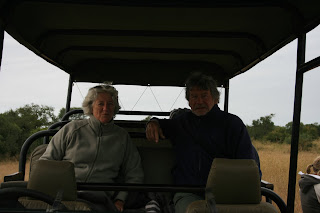 yesterday was a sad day for the walker family and the rest of the village of hope team, as they not only said goodbye to rebecca and lisa from jersey but also tim's mum and dad ( ann and roger) who had been staying on the farm for the last 6 weeks.....the place won't be the same without them, especially our mornings where a diet of porridge has been the order of the day!... ...but later this week we welcome another team from the united states and look forward to their help as we look to finish off the building of our tool shed, as well as completing the building which will serve as an overnight accommodation for visiting mums and installing some guttering around the buildings before the winter rains!
Post a comment
MORE »
More posts